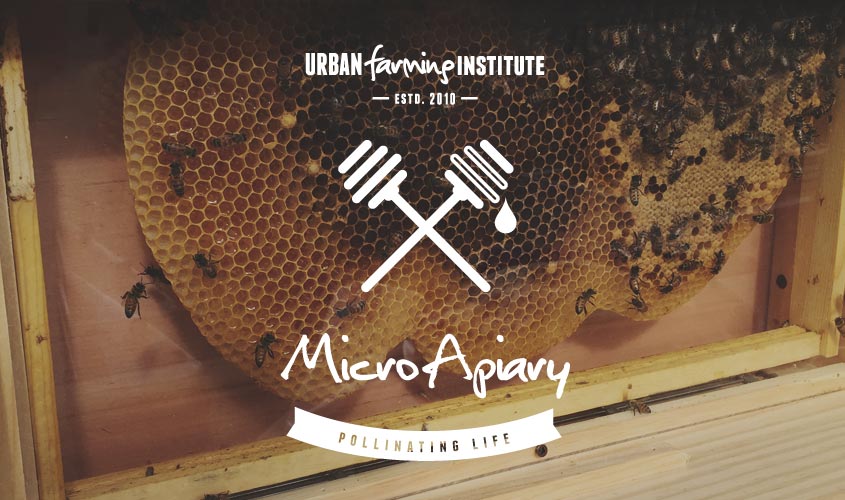 The Urban Farming Institute provides classes in urban beekeeping for all those interested in learning about bees as a hobby or as a profession. Here’s why.

We need bees at work in the garden, in the fields, in the groves and orchards…but where are the bees? Chances are that you have not seen them in sometime. Well, the good news is that the bees are coming to the Micro Apiary at the Urban Farming Institute in Oakland Park.

The City of Oakland Park was selected as the site or the first demonstration, micro apiary in Broward County in large part because of it’s partnership with the Urban Farming Institute and the City development of the Culinary Arts District.

The Apiary project is funded through the Broward Regional Health Planning Council, and construction services are being provided by John Coldwell of Coldwell Construction. This Apiary will be the first permanent and managed apiary in the County and will soon to be in operation at the Discovery Farm and Gardens located at the Urban Farming Institute in Jack Pastorius Park in Oakland Park.

The City of Oakland Park was selected as the site or the first demonstration, micro apiary in Broward County.

The apiary is part of the Discovery Farm and Gardens along with the community garden program, chefs garden, hydroponic farm and resource center operated by the Urban Farming Institute. UFI will be offering broad range of classes for those interested in becoming “urban bee keepers.”

The State of Florida supports the preservation of honey bees and permits honey bee hives in all zoning categories with the exception of deed of homeowner association restrictions. This means that just about any property owner interested in raising honey bees on their property is permitted to do so by the State.

UFI In The News

Call Us to Remove Bees from Your Home

Honey Bees Actually Need Your Help – It seems like we’ve declared war on our native bees. Over-development, habitat destruction, reduced plant diversity meaning a lack of food and pesticides have all impacted native been populations in a very negative wary.

Before you call the exterminator…call the Urban Farming Institute at 954-969-9577 and one of our trained Beekeepers will assist you with your issue.

Many times hives can be rescued and restored to a very productive level.

Contact Us Now to Rescue Bees in Your Area

A Little About Bees

Honey bees are essential for the success of food production. For thousands of years honey bees have played a central role in the development of backyard gardens, commercial farms and in the wild. Honey bees provide us with honey and honey is the only food eaten by man that is produced by an insect. Honey is also loaded with nutrition … vitamins, minerals, enzymes and essential nutrients.

Honey is considered a complete food because of these properties. Not only is honey good for us but the economic value of honey bees is measured in the 10’s of millions of dollars.

There is a real order to things in the bee hive. The 80,000 or so bees making up the typical hive live a very structured life with duties and tasks arranged by age.

The queen is the center of the activity in the hive. It’s her job to make sure there are more and more bees working in the hive and foraging for food.

Worker bees are the heavy lifters in the hive and are responsible for all of the activities surrounding the success of the hive. The role of the worker bee, all of whom are female, is to provide for the caref feeding and grooming of the queen.
The male honeybees are called ‘Drones’ and are slightly larger compared to the worker bees. Their only job is to mate with the Queen bee and they die immediately after the mating process is completed.

While the honey bee is a very hard working insect they do enjoy a temperature controlled home. Through their hard work they’re able to maintain the temperature of the inside the hive at a comfortable temperature of 93 degrees. That’s year round, rain or shine, hot or cold the hive remains at a pretty constant temperature. Honey bees are very well designed.

So well designed that they’re not supposed to fly at least that’s what the engineers say. But fly they do for up to six miles at a stretch at about 15 miles per hour. Those fragile wings beat up to 200 times per second. The mystery of bee flight was not understood until only a few years ago.

Swarming is an instinctive part of the annual life cycle of a honeybee colony. In fact … honey bees will swarm here in these warmer climes several times per year. This swarming activity is a natural way the colony reproduces itself. Bees in a swarm are usually docile and not included to sting or attack. Usually, within a few days the bees have moved on to a more permanent home.

The Urban Farming Institute flourishes with the support of the community and their gracious donations. From farm equipment to seeds, our mission to educate the community on growing fresh and organic foods would wilt without your help. Donations are tax deducible. Help Us!